Return of the Jedi

Well, not quite, more Return to the Pizza Jedis, but Ealing certainly felt like a galaxy far, far away from North London. It'd been ages since we'd been to Santa Maria, too long, but Ealing is a bit of a mission. It always took something special for me to make the trip, previously that was either great sushi or great pizza, but now Sushi Hiro's closed its doors it's the pizza that's the main draw.

And what pizza. Santa Maria are the daddies when it comes to Neapolitan pizza (no pun intended writing this on Father's Day) and no matter whose review, list or blog you read they're always knocking about the top spot of London's best pizzeria. It's well deserved too, as far as toppings go they're pioneers of the less is more approach, but with a crust like that and first rate ingredients who can blame them.

We arrived mid afternoon in the usual lull between lunch and dinner but the front area was full; their seating's split either side of the oven - I guess this helps during quieter periods as they can still fill one section completely and keep the atmosphere. We started with a garlic focaccia and aubergine parmigiana, the latter being spooned onto the former to make an impromptu mini starter pizza - don't judge - I was starving and this seemed like the most efficient way to offset a hunger related tantrum. 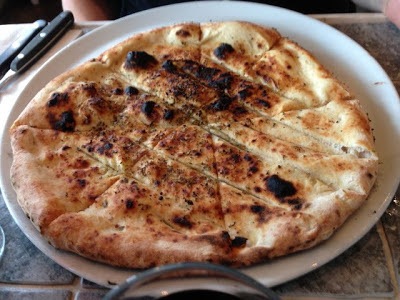 Civility restored the mains started arriving and by this stage the waiters were warming up for their Saturday night and had started singing along to what I assume were Italian classics. Let's just say their pizzas were better than their vocals but it all added to the atmosphere. We opted for the Santa Maria, essentially a pizza marinara, simply tomato sauce, olive oil, garlic (lots of), basil, oregano, a Neapolitan classic. Our second choice was their San Gennaro a napoli, with anchovies olives and capers. Both were spot on. In my opinion they're as traditional a Neapolitan pizza as you can get in London. It's the base which stands out, thin and yielding to the weight of the toppings in the centre but still speckled from the blistering heat of the oven. Cooking times are around the one minute mark, 50 seconds typically, just long enough to melt the delicate fior di latte, cow's milk mozzarella without it becoming too liquid. Perfezione! 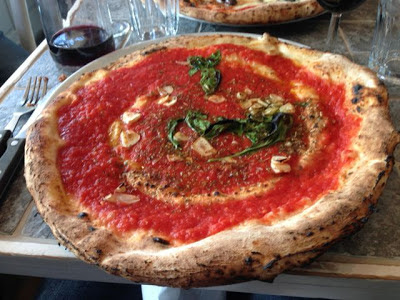 We rounded off the meal with some gelati, a tiramisu and a coffee. They stock Oddono's gelato which is always incredible, go for the nut flavours with the hidden gems of whole nuts. The home made tiramisu was my only complaint, it lacked the coffee hit to live up to it's translation as 'pick-me-up', but was rich, creamy and satisfying enough that I could have licked the bowl so I'll put that down as a minor quibble. The table next to us were bantered for ordering a macchiato; here a 'coffee' is an espresso and if you were to order a latte I'm pretty sure you'd get a glass of milk. These guys are traditional to the core and you've got to love them for it.
Posted by G at 18:47