Top That: Isle of Wight Ninja

A second topping post following on from last weekend's firing, this one slightly more traditional, a margherita with spicy nduja sausage or as I prefer to call it, the Isle of Wight Ninja. I picked up some stunning Isle of Wight tomatoes from the market, crushed over the dough these were better than any tinned tomatoes I could have used. For a bit of spice I added some nduja, the spicy Calabrian pork sausage and favourite of the Pizza Pilgrims
Ingredients
Our favourite sourdough base
Isle of Wight toms
Mozzarella
Fresh Oregano
Parmesan
Extra prep?
None again, I wouldn't add any extra oil, plenty comes out of the nduja 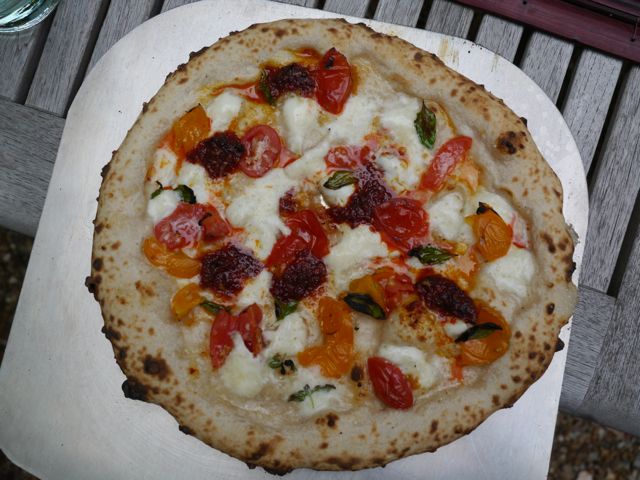 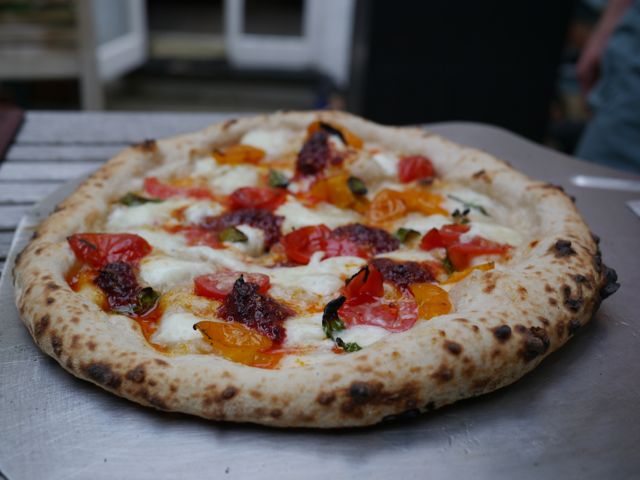 What I'd do differently
Not much, I'd possible add a chopped chilli for a bit more kick but given every batch of nduja seems to have a different level of spice this is one to adjust to taste
Posted by G at 18:47 1 comment:

I've long been a fan of the Serious Eats pizza blog, Slice and in particular their Top This feature which in their own words "show[s] you how to replicate unusually topped restaurant pies at home". Now I'm a pie fan but a pie to me is prefaced by the word "pork" and as a British pizza blogger I'll be sticking with the word pizza. Minor quibble's aside it's a great series and I've enjoyed following their suggestions to create many a memorable pizza at home. As homage to this I'd like to do something similar so here's the first post with one of my own creations, the stilton cheeseboard.

We had a block of stilton in the fridge which was looking pretty sorry for itself and that formed the inspiration for this pizza. Combined with some rosemary from the garden, walnuts for texture and some grapes for a touch of sweetness this turned out reasonably well.
Ingredients
Our favourite sourdough base
Stilton
Chopped rosemary
Sliced grapes
Walnuts
Mozzarella
Rocket
Olive Oil
Extra prep?
None really, although I added the rocket after baking to retain it's freshness
What I'd do differently
The olive oil wasn't needed, a fair amount of oil came out of the stilton. I'd add half a teaspoon of honey next time to balance the acidity and salt in the stilton too.
Posted by G at 18:04 No comments: